This lip-spoiler has the form low and projected to the front.ãIt leaves a normal good design and has a good figure. It exchanges to normal spoiler so that easily exchanging and economical.

This bumper is made air space at the front bumper bigger than stock bumper. It improves the cooling efficiency of the intercooler and radiator. It is considering for after parts (oil cooler,brake duct). It has the duct of both sides big, and adds an air duct to both sides. It contributes to the stability in high-speed-running because optimal down force is gotten by large-size rip spoiler.

A runnig-wind is discharged efficiently and engine room is cooled efficiently because this bonnet has two air duct at the central of front, and it has two air duct at the right-left part on rear part. This bonnet is made from FRP material so it is very light. It can prevent vibration of bonnet at the time of a high-speed-running because it is the three hold type which uses both two bonnet pin and normal holder.

This grille is installed for the purpose of cooling the engine room effectively. A runnig-wind enters into the engine room so that engine room is cooled. It becomes individual and sporty countenance by change of a front grille.

A beautiful line is made in side face because it is designed with JUN Front Bumper Spoiler and JUN Rear Mud Guards together. It is design with volume and considered running-ability. It has the newly added air duct which can use as air duct for rear brake cooling.

This mud-guard is divided two. It has sporty rear view because it is designed with JUN Front Bumper Spoiler and JUN Side Step together. It makes a contribution to rectification effect. 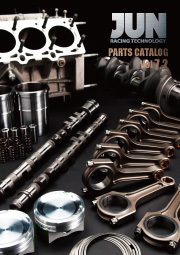